A Community Rich in History

One of the first pioneer settlements in the Michigan Territory, and the first in Lenawee County, Tecumseh grew from a communal log cabin erected on the riverbank in 1824 to the present attractive city. Tecumseh now has a variety of businesses and homes located in its historical structures.

Musgrove Evans, a Quaker from New York and Pennsylvania, was a surveyor and civil engineer.  He was attracted to an advertising campaign conducted in the East by Michigan’s Territorial Governor, Lewis Cass.  Evans was hoping to secure surveying contracts for the military roads that he knew would be built on routes used by Native Americans for centuries. Austin Wing, whom Evans met in Monroe on his first scouting trip, directed him to the area.

Water power furnished by the River Raisin and a nearby creek, rich soil, and an ample supply of timber among the “oak openings,” a natural clearing in the forest, Tecumseh was a carefully planned settlement.

Named for a great Shawnee Indian Chief as a sign of respect, the settlement and growing town continued to name its streets after Native American groups or pioneer settlers.

The Masonic Temple building shown around 1900 was built in 1894 on the northeast corner of Evans and Chicago Boulevard by Alfred James and the Tecumseh Masons. The first floor and the front half of the second floor was financed by James for a grocery, with the remaining portion for the Masons. A large auditorium for lodge meetings encompassed the story-and-a-half third floor. 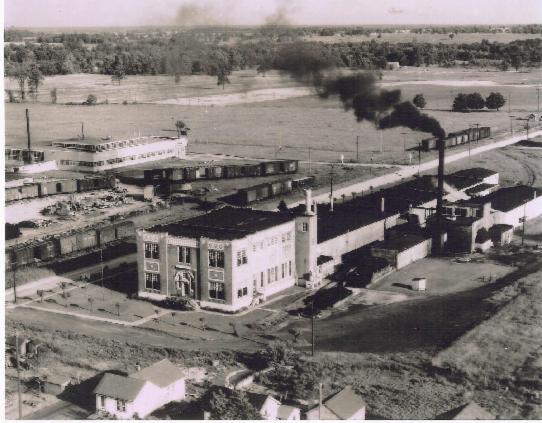 Built in 1911 along South Evans Street, Uncle Sam’s Macaroni Company went under due to the expenditures and the plant was sold to Quaker Oaks. Later this plant was retrofitted to manufacture cardboard boxes for the Tecumseh Corrugated Box Company. Across South Evans lies the railroad yard operated at the time of this picture (ca. 1917) by the New York Central Railroad Company. NYC had rail spurs leading into Quaker Oats as well as the Anthony Fence Company factory, which later was owned by Tecumseh Products, lying east of the rail yard.

Dr. Michael Patterson who was one of the first educated doctors of Lenawee County told a story many years ago about how the village of Tecumseh acquired its name. It was during the building of the Company House. A group of early settlers were sitting under a tree having lunch, after several names had already been discarded, Musgrove Evans suggested the name “Tecumseh”. One of party objected stating, “That Tecumseh had fought on the side of the British and was, therefore a British Indian”. Evans stated he was mistaken and that, “Tecumseh fought for himself and his people and was nature’s Indian.” Austin Wing, another earlier settler and financier, agreed saying “That is a fact, and one of nature’s noblest specimen of a Redman”.

Tecumseh was a powerful Shawnee leader who opposed the United States advancements into Native American Territory. His name translated in English meant “Shooting Star”. He was an inspirational and talented orator. Born in 1768, Tecumseh’s Father was killed by white frontiersmen when Tecumseh was quite young. As the United States continued to move west taking Native American Lands, he spent the majority of his life fighting settlers and trying to get the many tribes to unite against the American advancement. Many believe that Tecumseh visited the area where the village would be named after him, years prior. There were ceremonial grounds along the Raisin River that had been there for centuries. This may be where he addressed the local Pottawattamie who inhabited the area.

Siding with the British to stop American advancement, Tecumseh would lose the pivotal Battle of Tippecanoe in Indiana and the Battle of Thames in Ontario, which would claim his life in 1813. Due largely in part to Tecumseh’s death, Native American lands would be taken by Americans as the United States moved ever westward.

He is still admired to this day for standing up for his people and trying to unite them to save their lands.