Many learned of The Battle of the Little Big Horn from some history books or from Hollywood movies, but it did not develop or end in the manner depicted as

Many learned of The Battle of the Little Big Horn from some history books or from Hollywood movies, but it did not develop or end in the manner depicted as written or shown. The defeat of the U.S. 7th Cavalry by a combined force of Lakota and Cheyenne warriors involved many twists and turns in the 1876 campaign and battle itself that led to the end result.  This program presented by David Ingall on Monday, March 19, 2018 at 7 p.m. at the Tecumseh museum will encompass known facts and debated theories, where you’ll have to make your own judgments about what really happened and who’s to blame!

Highlights will include the army’s plan and Sitting Bull’s vision, along with reconnaissance, routes taken, and discovery.  Is this the last message “Be quick, bring packs” and what about the “Last Stand” and disintegration of Custer’s command, and what about the others in command of soldiers? 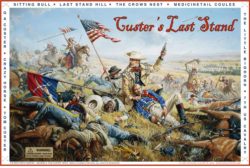 David Ingall’s interests focus on the Civil War, Michigan in the Civil War, and General George Armstrong Custer.  His research includes the lives of many Monroe County Civil War soldiers as well as 25 of his own relatives who served in that war.  He served on the committee, and as 2012 dedication ceremony chairman, that dedicated the Monroe County Civil War Fallen Monument at Monroe’s Soldiers & Sailors Park.  He researched and wrote the booklet, “Monroe’s Historic Woodland Cemetery,” the “Camp Monroe” historical marker dedicated in 2014, and co-authored the book, Michigan Civil War Landmarks, published by History Press in 2015.  Dave is the past assistant director of the Monroe County Historical Museums and a graduate of Western Michigan University.  He is involved in several Civil War organizations, including Custer Battlefield Historical and Museum Association and the Custer Battlefield Preservation Committee.