Many moons have come and gone since October 5, 1813, when Chief Tecumseh was slain at the “Battle of the Thames.”  He is no more, but his memory is cherished by the Native Americans for whose freedom he so valiantly fought.

His life is clouded with as much mystery and superstition and his burial place remains unknown.  Even where he was born has not been verified, but many agree that he was born in 1768 and he was of the Shawnee Nation.  Some say he was born “on hacker’s Creek, Virginia” and others say “in the Ohio country on the Scioto River” or maybe “at the junction of the Clearwater where it joints the great Miami River.”  Then again it might be “by the banks of the Mad River, Ohio,” but most writers claim he was born near Chillicothe, Ohio –pronounced “Chi-la-katha”. 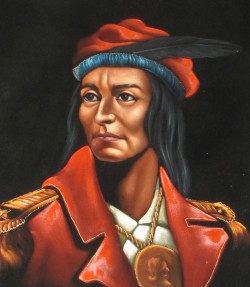 Chief Tecumseh had a vision shortly before battle foretelling a dark shadow of his fate.  Donning for the last time his leggings and tunic of deerskin, he removed the British general’s uniform he had been wearing, and gave his sword to one of his chiefs with the words “Give this to my son when he becomes a warrior and able to wield a sword.”