A Red Cross program designed to boost morale for U.S. combat troops in Vietnam, the Donut Dollies were single, female college graduates who volunteered, motivated by President John F. Kennedy’s call to duty and service. They were to present themselves as reminders of the girl friends, wives, and sisters waiting back home.  They’d listen to the men, play games and records at the recreation centers. 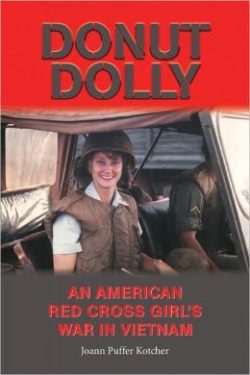 Joann Puffer Kotcher was one of those Donut Dollies and she will speak on Wednesday, July 17th at 7:00 p.m. at the Tecumseh District Library, Meeting Room A, on the publication of her book: Donut Dolly: An American Red Cross Girl’s War in Vietnam.

Kotcher describes controversies surrounding one of the bloodiest wars of our time 1962-1974, with a historic perspective. The book shows her own baptism into the war and her experiences with the grueling life of the ordinary soldier. She spent five duty stations at the height of the War seeing what many girls would never encounter. Prior to serving in Vietnam she served in Korea for 14 months.